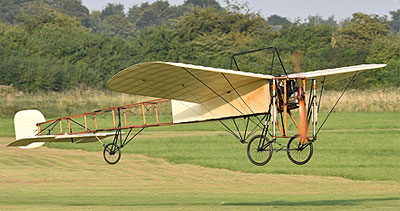 The first powered flight in Australia.
FH Jones was in England and was impressed by the flights of Louis Bleriot who had flown from France to Dover in England. Jones paid £1000 for a Bleriot Type XI monoplane, powered by a 24hp Anzani rotary engine and had it shipped to South Australia. Bill Whitber (a S.A. Engineer) assembled the aircraft. After being displayed in John Martin's Department Store in Adelaide, it was taken to a paddock at Bolivar. On 13 March 1910, Wittber was taxiing the aeroplane when he struck a tussock and took off into the air for about 15 metres before landing unharmed. Wittber never claimed it as a flight.

On 17 March 1910, Frederic Custance is believed to have taxied the aircraft around the same paddock several times before taking off on the first flight. A second attempt resulted in the aircraft stalling and crashing causing extensive damage. The Bleriot was returned to Adelaide for repairs and a few weeks later was destroyed by fire. Not long after the Bolivar flight, Harry Houdini flew at Diggers Rest in Victoria in front of a large crowd and claimed the record for the firsrt flight in Australia. Supporters of the Houdini 'first flight' claim suggest that the flight at Bolivar was not a 'controlled' flight.
Source: http://www.jaunay.com/custance.html
Bill Whitber later constructed the first Australian built aircraft engine, which is on display at SAAM.

After the Custance flight at Bolivar, there is no record of another flight in South Australia until after the First World War, when military aircraft became available for civilian use. By 1919, barnstorming and joyride flights were taking off from suburban fields like Unley Oval and Albert Park (Hendon).

The first commercial flight in Australia was on 6 August 1919, when Harry Butler carried the mail by air from Adelaide to his home town of Minlaton on the Yorke Peninsula. It was also the first flight over sea in the Southern Hemisphere. The aircraft was a Bristol M.1C monoplane known as "the Red Devil". This aircraft is on display at Minlaton (York Peninsula).

In August 1919 Butler and H.A. Kauper formed a company which they called The Harry Butler and Kauper Aviation Co Ltd. This company was formed at an air strip at Northfield in Adelaide. By October 1920 the company operated from an airfield at Albert Park, Adelaide, which Butler had purchased out of his own money.

Butler made his Northfield aerodrome available to the Smith Brothers for the arrival of their Vickers Vimy aircraft (G-EAOU) on the 23rd March 1920. This airfield was selected because it met the requirements for the personal safety of Ross Smith and his aircraft. It also had the necessary pre-requisites for controlling the massive crowds which attended his arrival. Butler's other airfield at Albert Park was deemed the best airfield available by the Civil Aviation Branch to become the site of the first Adelaide Commonwealth aerodrome. It was compulsory purchased on 5th July 1922 and later became the centre of aviation activity in the State.

On 11 January 1922, Butler crashed his plane near Minlaton. He was badly injured, but after he recovered he continued flying until 30 July 1924, when he died from a cerebral abscess.

In 1919, Horrie Miller was working in Adelaide as a aircraft mechanic. In 1920, he took delivery of an Armstrong Whitworth war disposal aircraft and, with Arthur Kennedy, formed the Commercial Aviation Company operating out of Parafield. In 1922 the partnership was dissolved and Miller sold the aircraft to Queensland and Northern Territory Aerial Services Ltd; it was one of the first two planes QANTAS owned.

In 1926, in Adelaide, C.J. Levien and C.V.T. Wells formed a gold mining company called 'Guinea Gold No Liability' with the intention of mining in the Bulolo area of New Guinea. They decided that aircraft would be used to overcome the transport difficulties in supplying their mine in the difficult terrain. On April 18th, 1927 it flew with its first passenger from Lae to the gold fields. The journey, which had previously taken 10 days on foot had been accomplished in only 45 minutes.

Guinea Airways was formed on 4th November, 1927 as a separate company to carry freight as part its parent company's gold-mining operations in New Guinea. During the next few years the company was to become the world's leading freight operator, carrying huge loads by 1930 standards, including complete motor cars. Guinea Airways could carry about 16 tonnes a day and carried in one month more freight than all other aircraft in the world actually carried in one year.

In February, 1937 they commenced a weekly service between Adelaide and Darwin and won the Royal Mail Darwin/Adelaide trunk route in 1938. In January 1942, the Japanese bombed the company's headquarters at Lae, and they lost the bulk of the fleet of 15 aircraft. After the war, they were unable to return to operations in New Guinea and the profitable Adelaide/Darwin service was taken away and passed on to Trans Australian Airlines (TAA). Guinea began cooperating as a junior partner with Australian National Airways(ANA).

Merger proposals submitted by Australian National Airways were rejected by shareholders, although ANA virtually became managing agents. Ansett Transport Industries Limited (ATI) acquired ANA and so Guinea made an arrangement with TAA on 1st July, 1958 to receive the services previously made available by ANA. This led to a successful take over offer on the 1st July, 1959 by ATI (Ansett). Guinea Airways became Airlines of S.A. (ASA) on 17th January 1960.
Source: SLSA Document - Guinea Airways Ltd. (.pdf)
Note: SAAM has an 'Guinea Airways' display in Hangar 1
Airlines of S.A. 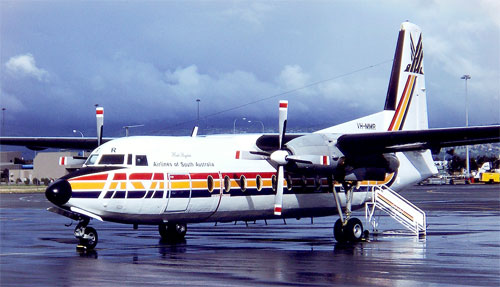 These routes had previously been serviced by Guinea Airways, which had been purchased by Ansett in 1959. ASA took over the Guinea Airways existing fleet of five DC-3s and an Auster, and added a 52-seat Convair 440 VH-BZH.

Throughout the 1960s, services were briefly added to Naracoorte, Millicent and tours to Hayman Island, Queensland from Adelaide while several initial services were progressively discontinued. A Piaggio P166 and a Fokker F27 Friendship (the first of several) replaced older aircraft. Airlines of S.A. were taken over by Ansett on the 28th June, 1986.
SAAM's Commercial Aviation Displays

A recent addition to SAAM's Commercial Aircraft displays is the forward fuselage of the Cobham British Aerospace BAe 146-300 Short Haul Regional Jet Airliner. This aircraft (section) has been restored to provide an interactive exhibit where visitors will be able see the cabin as it was in use.