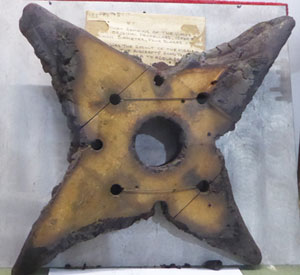 SAAM has one of the best collections of historic propellors in Australia. One of the most significant ones is shown in the picture on the left. This is a propellor hub from the Smith Brother's Vickers Vimy aircraft (G-EAOU) which made the first flight from England to Australia in 1919. It shows the damage done when the aircraft caught fire in November 1957, while being transported to Adelaide by truck. The mainplane, propellers, engine cowlings and radiators were destroyed in the fire, but the fuselage was largely undamaged. The (restored) aircraft is now on display in the new terminal building at Adelaide Airport. SAAM has a collection of memorabilia from the first flight (donated by the Smith family) on display in Hangar 1.
Other Propellors

Avro 504 propellor. The Avro 504 was a WW1 biplane. The engine was possibly either a Gnome or a Le Rhone rotary engine. 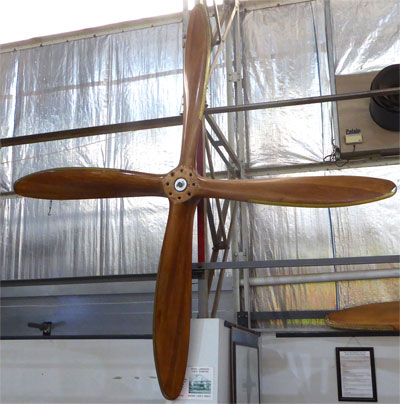 Supermarine Seagull 111 propellor, 4 blade, laminted wood, 3.06m diameter, Napier Lion engine. In 1925, the Royal Australian Air Force (RAAF) ordered six Supermarine Seagull III aircraft, fitted with a Napier Lion V engines. The aircraft were freighted to Australia arriving in mid-1926 with the first test flight conducted in June of that year. A further three aircraft were ordered in 1927. The Seagulls were normally located at RAAF Base Point Cook, Victoria but were used on the sea plane carrier HMAS Albatross.