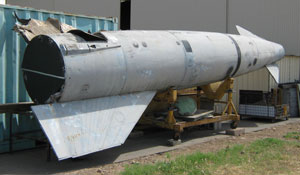 Blue Steel was a short range stand-off missile designed to carry a nuclear weapon and be launched from a Vulcan Bomber 100-200 miles from its target. The Blue Steel was tested between 1960 and 1963 at Woomera and went into service with the RAF. SAAM's Blue Steel Missile is able to be seen in the side compound through the fence (near the carpark). It has sufferred accident damage and we hope to restore it in the future. 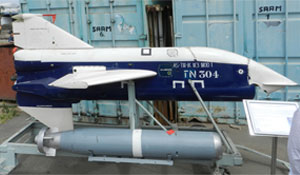 Ikara was designed by DSTO in the 1960s and named after an Aboriginal word for 'throwing stick'. Ikara is not technically a missile, it is a rocket powered delivery system used to transport the Mk 44 torpedo to the target zone identified by the ship's sonar. Guided by a radio command link, the torpedo was released and then descended by parachute. When reaching the water, the torpedo would home in on the target using an acoustic sensor. Ikara was used from 1965 to 1991. For more on Ikara, click here. 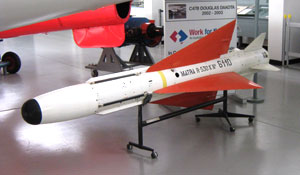 The Matra R-530 was a French ani-aircraft missile. In RAAF service it was installed on the Mirage III fighter. The Matra was powered by a two-stage rocket motor and was capable of speeds up to Mach 2.7 with a range approaching 20 kilometres. It had two forms of guidance – Semi-active Radar Homing (SARH) or Infra-Red Homing (IRH). Some 2,400 units were produced; the Matra R-530 has now been withdrawn from active service. 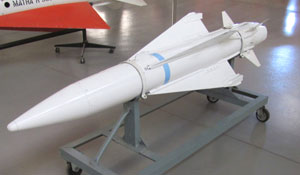 The Sea Wolf was designed and manufactured by British Aircraft Corporation (now British Aerospace). It was used against sea-skimming missiles, high-angle anti-ship missiles and aircraft. Testing was undertaken at Woomera in the late 1960s. Sea Wolf was used by the Royal Navy from 1979 until 2018. It was used in the Falklands War, shooting down five Argentinian aircraft; in one incident four A-4 Skyhawks attacked HMS Brilliant, two being shot down and a third crashing while trying to escape a Sea Wolf missile.